What is Gelato anyway? 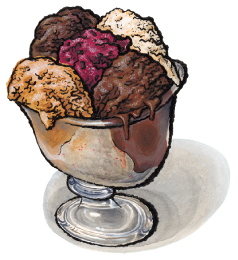 Put simply, gelato is Italian ice cream, made from the same ingredients as American ice cream, but in different proportions. Gelato has roots that stretch back thousands of years. The earliest frozen desserts on record can be found in Asian cultures where crushed ice mixed with flavorings was a refreshing beverage, to the ancient Egyptian pharaohs offering a cup of ice flavored with fruit juices to their guests. Frozen desserts first came to Italy in the Roman tradition of eating ice gathered from the volcanoes of Etna and Vesuvius that was covered in mellifluous honey.

It was during the Italian Renaissance that gelato in its modern form was first created. In the 1500’s, a wealthy family commissioned artist and architect Bernardo Buontalenti to create an elaborate feast for the visiting King of Spain. Not only was Buontalenti talented in the arts, he also had quite a culinary prowess and crafted a creamy frozen dessert for the King that has since been known as gelato. The love for this indulgent treat spread quickly throughout Europe and became deeply entrenched in the fabric of everyday life in Italy.

So what exactly, you may ask, is the difference between gelato and ice cream?

There are 3 big differences between gelato and ice cream. The first, mentioned above, is the lack of air incorporated into the mix. Ice cream is traditionally made up of 50% volume by air, while gelato ranges between 20-35%. Gelato has a much lower percentage of butterfat than ice cream, coming in between 4-8% versus ice cream’s 14%. This seems paradoxical because gelato can taste so much creamier than ice cream yet has much less fat. Finally, sugar content is closely monitored and balanced with water content and come in slightly lower than ice cream. So in gelato, sugar serves both to sweeten and act as an anti-freeze.

Here at Zingerman’s Creamery, we take pride in the ingredients we use for our hand-crafted gelato. The same great Calder Dairy cows milk we use in our cheese forms the base for our gelato. We pasteurize it in small batches for our equally small-batch flavors.

Three reasons we love to eat our Gelato!

2. Traditionally-Crafted
We make gelato with traditional Sicilian techniques and with authentic equipment we brought over from Bologna, Italy.

Thank you for visiting the Cream Top Shop. Happy Holidays - Cheese tray orders are closed until after Thanksgiving! Dismiss